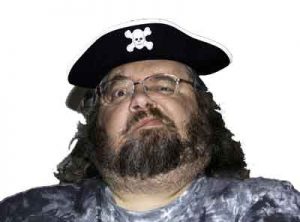 came into the filk music scene in 1985. Since then, Tom has been a vital presence in the filk community. He creates compelling music, performing it with verve, and electrifying audiences. He has done much to popularize filk and draw in new people over the last twenty years, not just because of his undeniable talent, but because of his real passion for the music, and for the community.

Tom has written dozens of songs in a wide range of musical and lyrical styles, dealing with subjects from light to twisted to dark to breathtakingly beautiful. He has crafted several wonderful serious songs such as “Starlight and Saxophone”, but is also infamous for his puns and comedy. He introduced a character that will forever live in silly-filk infamy, Fenton, the Death Sheep from Hell. He does topical themes (“Domino Death”), science fiction take-offs (“Temperature of Revenge”), lump-in-the throat pieces (“A Boy and His Frog”), and songs of raw passion (“Heat of the Blood”).

Tom is also widely known for his “insta-filking” ability. Most remarkably, in 1994 at OVFF, the song writing contest topic was “The Best Song Tom Smith Never Wrote.” Tom sat in the audience, furiously scribbling, while each contest entry was performed. When the final contestant had stepped off the stage, he got up and filked every single contest entry, earning a standing ovation.

Tom won the song writing contest at OVFF three of the four years from 1987 through 1990. He has won ten Pegasus awards, the most of any filker, in the categories of performer, songwriter, and best song.

He has been a featured guest at numerous conventions because of his ability to draw both filkers and non-filkers to his performances. He is also one of the few filkers whose music has transcended the genre and gained recognition in mundane circles as well. His material has been featured on Dr. Demento’s radio show and fan club CDs, and on National Public Radio’s “Sound and Spirit”.

He continues to push the boundaries and do things that other filkers can’t do, won’t do, or simply haven’t thought of yet.

For these contributions to filk music and the filk community, Tom Smith is inducted into the Filk Hall of Fame this second day of April, Two Thousand and Five.