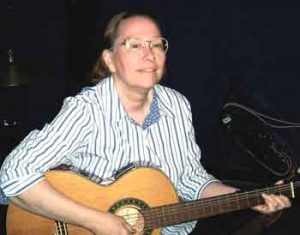 made many important contributions to modern filk during the formative era of the late 70’s. Beginning in 1978, she published Kantele, the first filk zine; the first three issues in collaboration with Clif Flynt, and the remainder alone, until it ceased publication with Issue 14 (Winter 84/85). Kantele published the best current filk music, articles on all aspects of filking, and filking news, and set the standard for the filk zines that followed.

In 1978, when printed filk books were rare, Margaret published an influential collection of songs, “On and On Into the Night”. This contained some of the best filksongs of the day, including Joe Haldeman’s “Ballad of Orbital Hubris”, Leslie Fish’s “Hope Eyrie”, and Anne Passavoy’s “Marcon Ballroom”.

In 1978, Margaret was a principal force in the formation of the Filk Foundation. She served as its Secretary/Treasurer from its official organization in 1979 until it became inactive in the mid 80’s.

In 1979, she organized and co-chaired the first filk convention, FilkCon I, which took place near Chicago, thereby demonstrating that a filk convention was workable and launching a family of filk cons that continues to this day.

In her trademark blue caftan, Margaret was a filk-room fixture for many years. Her repertoire was wide. In the days before recorded filk was widespread, she carried songs from one convention to another, spreading the wealth. She is well known for her encouragement of others within the filk circle.

She wrote a number of songs, including “The Biggest Filksing in the World”, and “The Exotics Song”. In 1982, Off Centaur Productions published a tape of her work, “Margaret Middleton at Bayfilk 1”.

For these contributions to filk music and the filk community, Margaret Middleton is inducted into the Filk Hall of Fame, this Twelfth day of April, Nineteen Hundred and Ninety-Seven.